Florence, pearl of Tuscany, the birthplace of the Renaissance and has been called "the Athens of the Middle Ages".  The birthplace of Michelangelo, Dante, Galileo, Machiavelli, Rossini and many other famous citizens, doesn't need much of an introduction as it is one of the most spectacular city in Italy or maybe even on the world. In the past it has been a home to many incredible painters, sculptures, architects, poets and important church figures. Even if you are not an art connoisseur you probably heard of people such as Michelangelo, Dante Alighieri, Donatello, Niccolo Machiavelli or Leonardo Da Vinci who made Florence their home at some point and therefore left their work for us to see now.

This couple went to Italy, Tuscany, for their honeymoon right after their wedding. Their wedding photosession in Florence, , took place in the hottest period, in August 2015. We met in the square in front of the Cathedral of Santa Maria Novella, near the central station with the same name, and we started our wedding photo tour of the route I planned in advance (I always make a route for a photo shoot in the most beautiful and interesting places in advance). We photographed with the Florentine Duomo as a background, the Cathedral of Santa Maria del Fiore and the bell tower of Giotto, at the Baptistery of San Giovanni, then went to the Palazzo Vecchio in Piazza Signoria, where my couple ate Italian ice cream, gelato artiginale, and I photographed them. From Piazza Signoria we crossed the Arno River on the famous Ponte Vecchio bridge, originally built during the time of Ancient Rome, and came to the end point of our walk-photo session, to the Palazzo Pitti, made of rough-worked stone, the treasury of the Florentine powerful dynasty of the Medici. To the Palazzo Pitti are adjacent beautiful Bobboli gardens, where we strolled and photographed for a long time, till my newlyweds were not exhausted under the scorching sun of Tuscany. 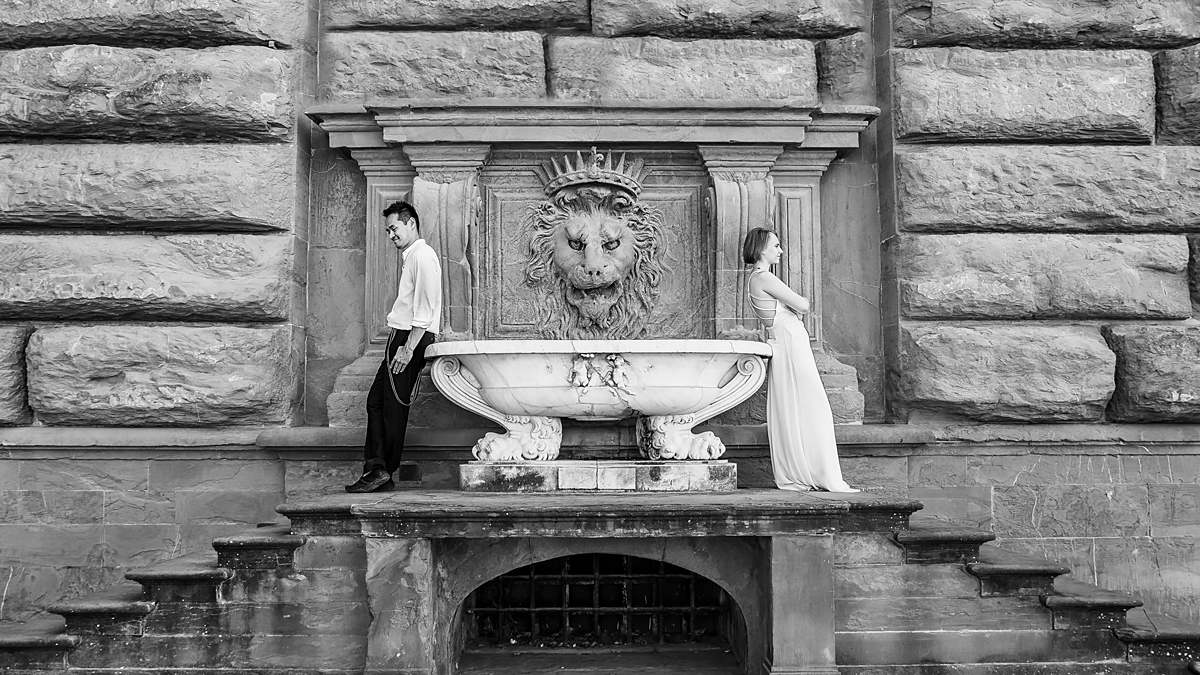