Everyone knows that Italy is the most beautiful country in the world, and Tuscany is its most amazing region. Even for the Italy, which abundant of the attractions, Tuscany is a unique pearl. The architectural beauties of Florence and Pisa, Volterra and San Gimignano, Lucca and Siena, and many more and many of its cities; monuments of history and culture, famous museums, in which works of the greatest artists and sculptors are collected; the birthplace of Dante and Petrarch, Michelangelo and Leonardo da Vinci; magically beautiful rural landscapes of Val d'Orcia and Chianti valleys, hills, vineyards, medieval castles, cypress alleys leading to cozy small villas; the famous wines of Chianti , Montepulciano, Nobile; wonderful rustic Tuscan cuisine - all this is a beautiful Tuscany, and all its advantages simply can not be counted.

Equally beautiful is the neighboring Umbria; like Tuscany, it was part of a single state, ancient Etruria, and, like Tuscany, retains the traces of the Etruscan cultural heritage. In ancient Rome, the Etruscans were called "Tusks", this name was later reflected in the name of the Italian region of Tuscany. Etruria was located in the area between the rivers Arno and Tiber, and its people, the Etruscans, created a developed culture that preceded the Roman one, and had a very great influence on it, in particular, developed engineering art, the erection of arched buildings; such Roman customs as gladiator fights, chariot races and funeral rites; making and painting jugs and vases, processing bronze and much more, all this also has Etruscan origin.

Umbria is unfairly deprived of the attention of foreign tourists, because it is not advertised as the world-famous her neighbor - Tuscany, which is one of the region, most visited by foreign tourists. The large influx of foreign tourists leads to a strong overstatement of prices, therefore Italians, traveling around their country, prefer Umbria to neighboring Tuscany, with its equally beautiful nature and landscapes, architectural beauties, and equally rich history, at much more democratic prices. The most beautiful cities of Umbria - Perugia, Terni, Spoleto, Gubbio, Assisi, Orvieto, Narni, Citta della Pieve, Cortona ...

It is because of the small number of tourists in the region and given the relatively low level of prices for wedding services, I once again offered Umbria, or rather a small town on the shores of Lake Trasimeno, almost at the very border of Umbria with Tuscany, to my couple of newlyweds as a place for a symbolic wedding ceremony and residence, and for variety I offered them to take a ride for a photo shoot to the Tuscan city of Montepulciano, good distance of only about 30 km.

I offered to my couple to accomodate in a beautiful farm house, we held there a preparations of the bride and a touching symbolic ceremony, and then went to Montepulciano, on the way admiring the magnificent landscapes of Umbria and Tuscany. After the photo session, we returned in agriturismo, where we prepared for the newlyweds a beautifully decorated wedding dinner in a separate restaurant hall.

You can view this wedding in the album. 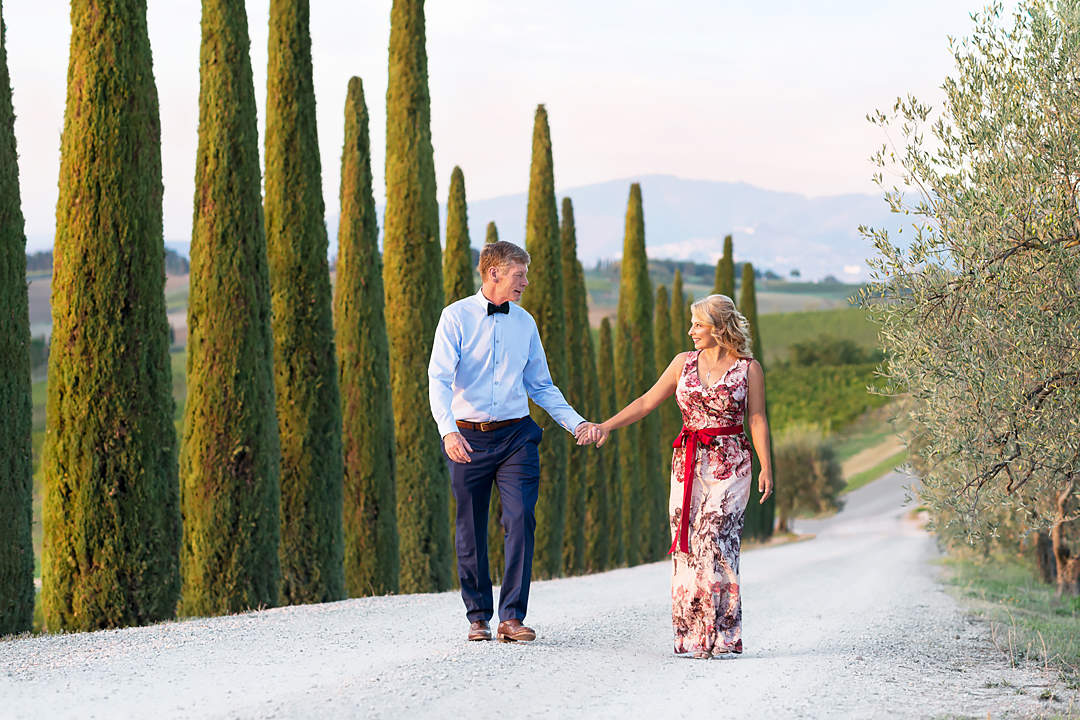