As in most cases in my practice, I combined at this wedding two roles, a wedding photographer and wedding organizer in Italy.

Elena wrote to me in September, and wanted her formal wedding to take place no later than October. The timing was pretty tight, but we tried and we have organized everything!

I do not like to offer my brides the same locations, already tested with someone before, so I try every time to offer a new place, one of hundreds of beautiful corners of Italy, individually for each of my pair, in a word, I do not like to repeat. After all, a wedding is a unique event in the life of each unique couple, so I think that the place for the wedding should also be unique for each particular couple)) Although these searches each time greatly complicate my work, but, nevertheless, I am very I am happy that all the weddings organized by me are always held in different locations.

So, Elena and I analyzed the prices and regions, and stopped our choice on Liguria; we chose a pretty town by the sea, in which the official wedding ceremony was cheap and I started organizing a wedding, chose a place of accomodation for my couple, and organized for them a wedding tour for their honeymoon around Liguria, Tuscany and Umbria, to places where I have already visited myself, and which have touched into my soul))

Early in the morning on the wedding day we met in the municipality and signed a declaration of the intention of the couple to marry, took the wedding bouquet and gift for the couple from our wonderful florist (a beautiful wicker basket filled with petals of roses for the ceremony and lovely envelopes with congratulations), and then we all went to prepare for the event in a nearby town, where Elena and Andrew already lived in a fabulously beautiful hotel located on the shore of the bay ... 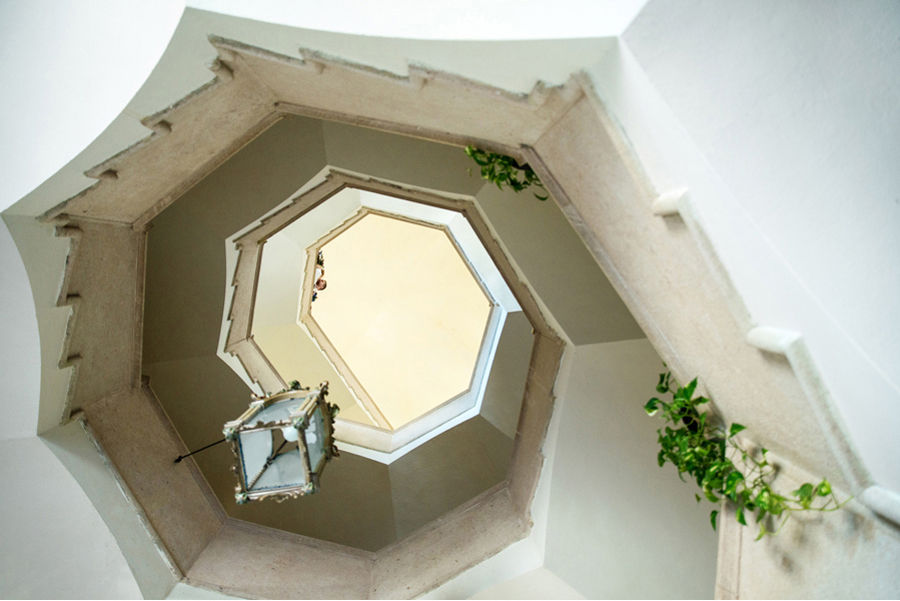 While our stylist Irene was prepare the bride Elena, I dragged and photographed her wedding dress in the halls of the hotel-castle and even took out to work outside; the bouquet is also not left without attention, the florist Marzia tried very hard and created a very beautiful autumn composition of flowers, greens and real berries. 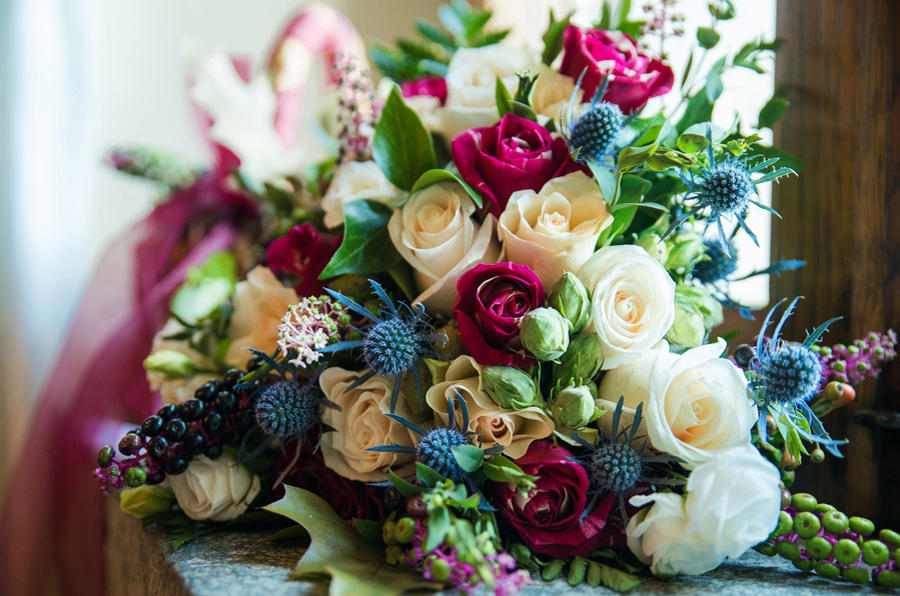 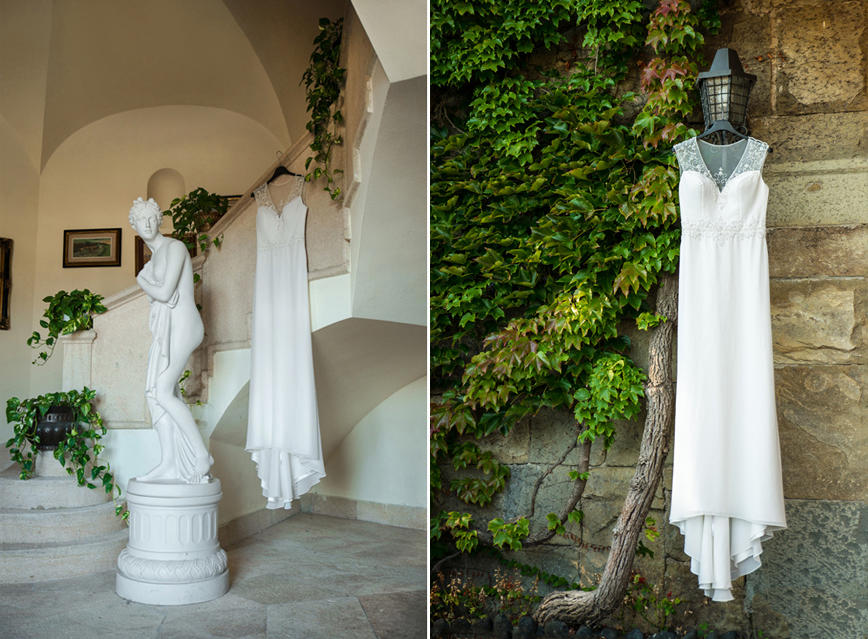 Then, when the bride was ready, we put in the basket the prosecco and the glasses I brought for Elena and Andrey from Turin, took some pictures in the corridors and halls of the hotel, and went downstairs, where the driver Paolo with his retro Citroen car were already waiting for us, he decorated his car with flowers as a gift to the newlyweds, and we went to the wedding place (the place of the ceremony was a beautiful location with a Saracen tower on a rock by the sea. 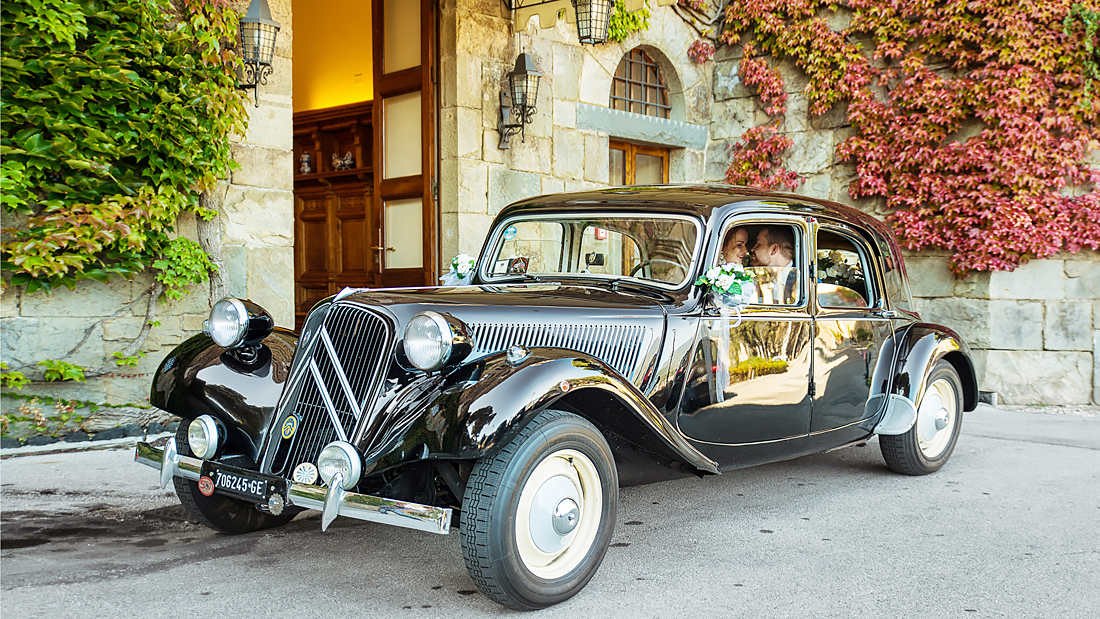 At the site, a municipality employee were already waiting for us. The ceremony began, background music played, the registrar delivered a speech, and Irena translated it. Elena cried with happiness, and Andrew's eyes gleamed with tears held back)) I was shooting the ceremony, and my husband was making a video, the video was another one of our gift to this wonderful couple. 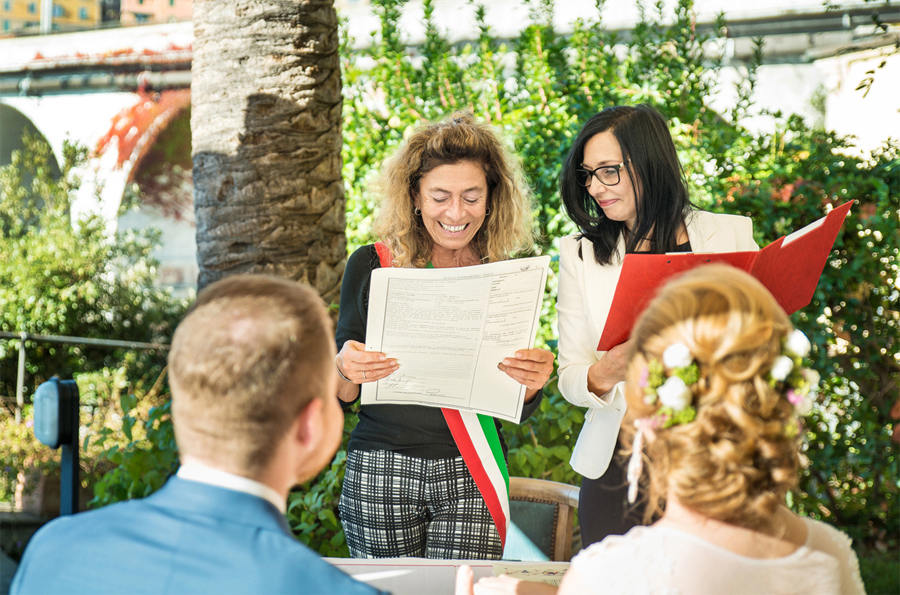 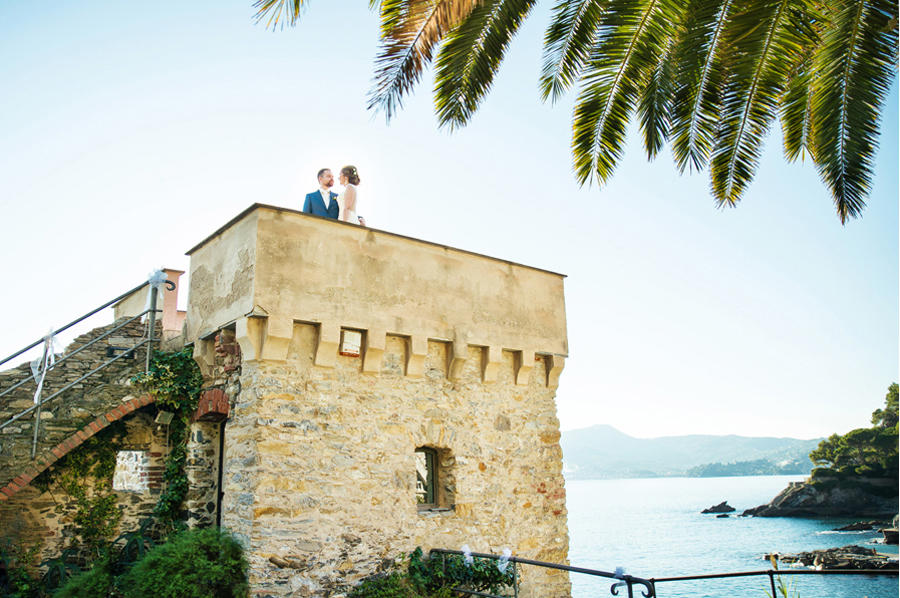 After the ceremony, Irena rose to the roof of the tower and sprinkled the petals of roses on the heads of our happy newlyweds, and we caught their sincere emotions) Irena's friend brought a hot Ligurian focaccia with cheese, and we arranged a small aperitif at the place of the ceremony, congratulating the newlyweds. 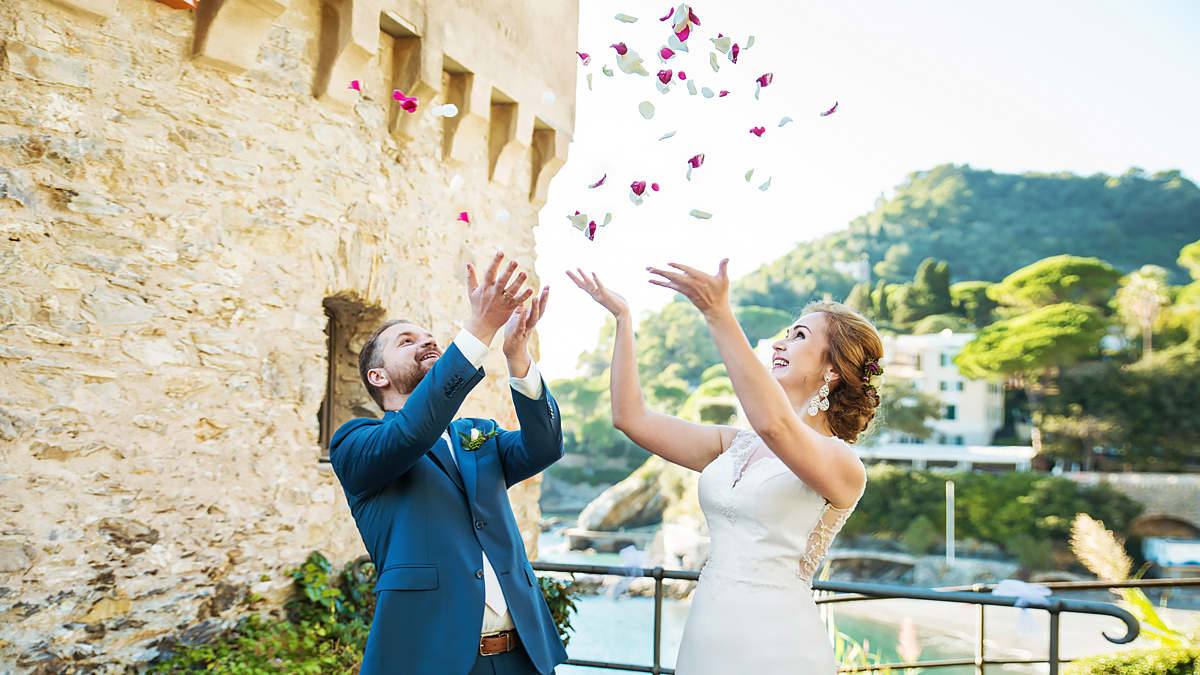 After a walk-photo session by the path cut in the rock just above the sea, and after Elena and Andrew climbed the rock to make a couple of beautiful shots, 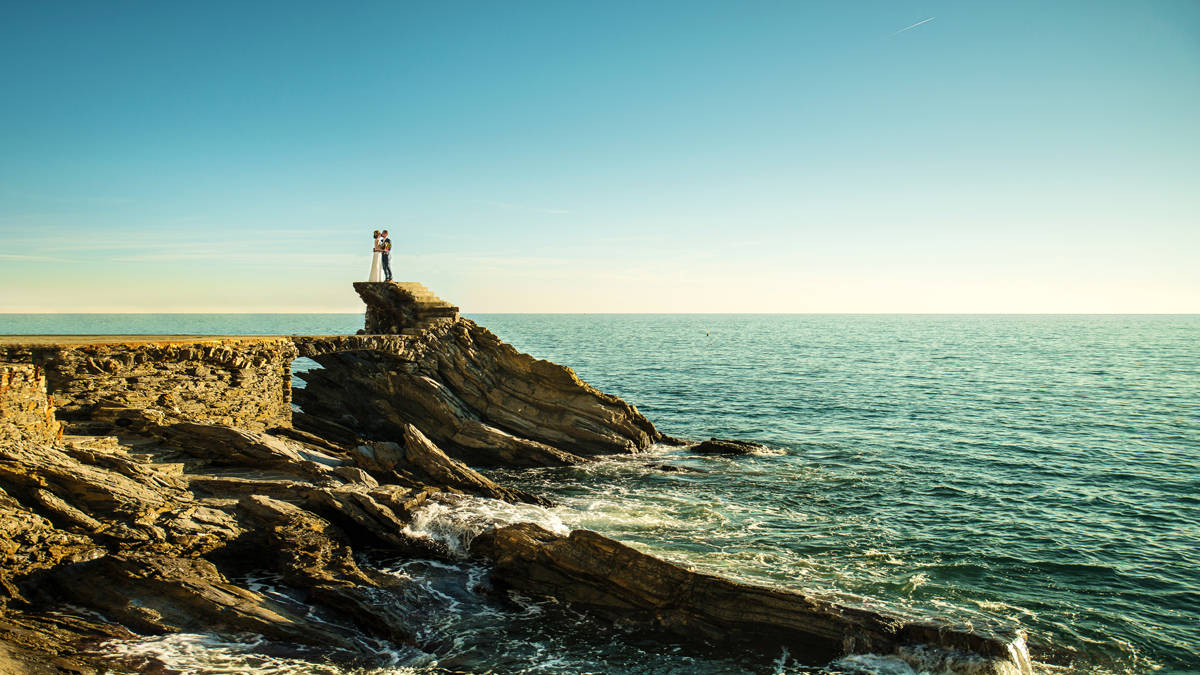 we went to the square with a fountain, and after seeing the children playing, we decided to ask them to catch the bride's bouquet (in view of the complete lack of guests))) The kids got down to the cause with all responsibility, the bouquet was caught by the boy and handed back to the bride))) 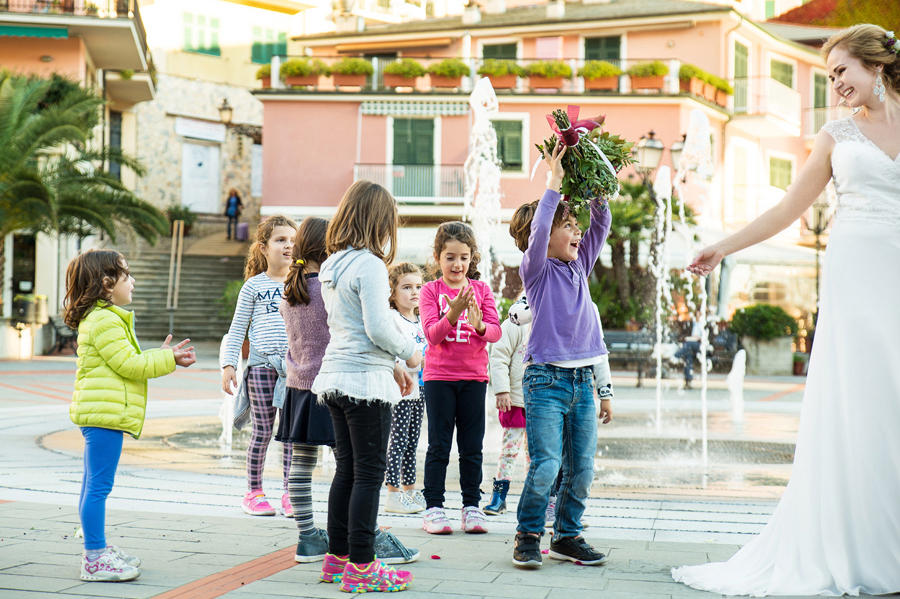 The day was approaching towards evening, we went to be photographed on the sandy beach in the rays of the sunset, 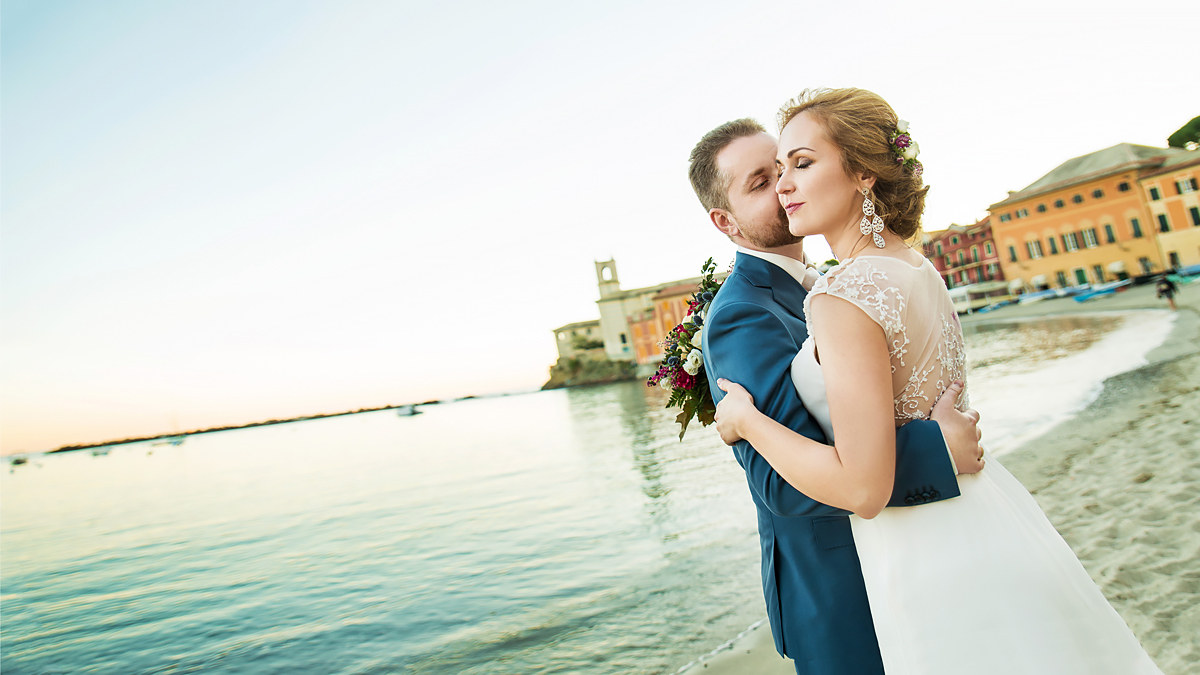 and then we moved to the hotel park to make at least a couple of pictures. 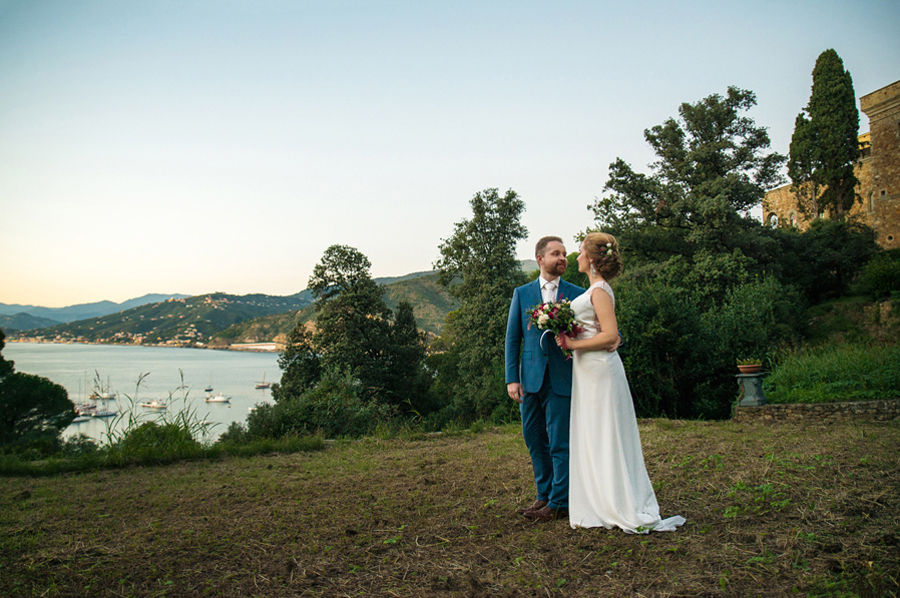 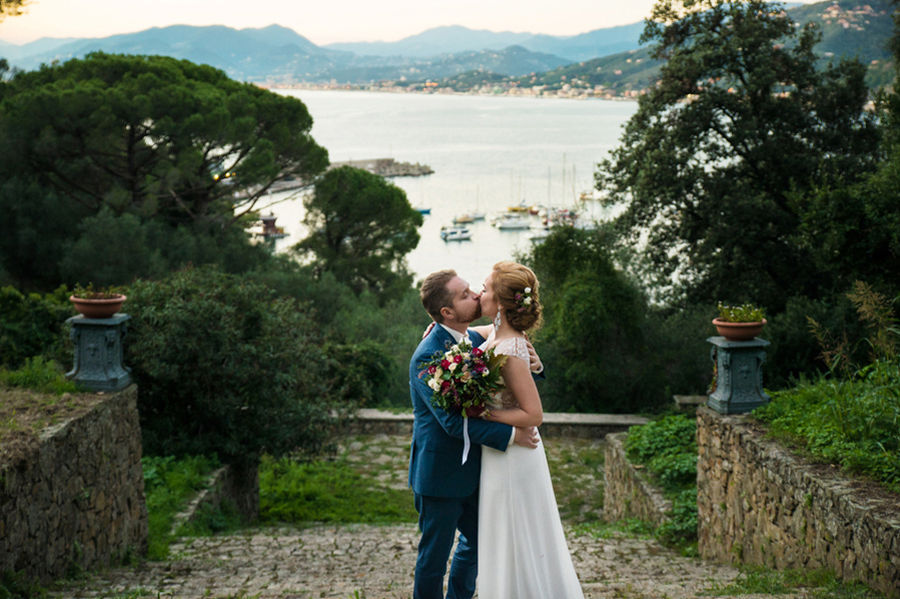 And after, when it was already dark, we arranged a farewell fireworks on the beach, and sent our newlyweds to the hotel restaurant, where they were waited for by a wedding dinner for two.

So this sunny October day passed, which, according to Elena, became for them the happiest day! 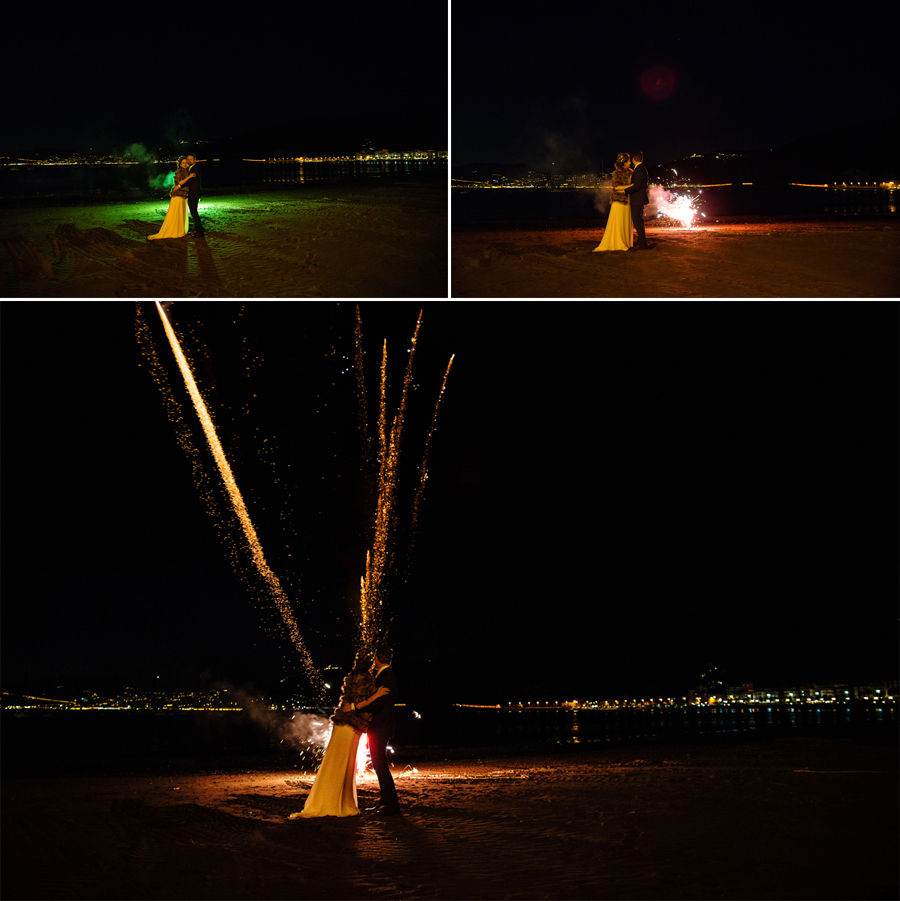 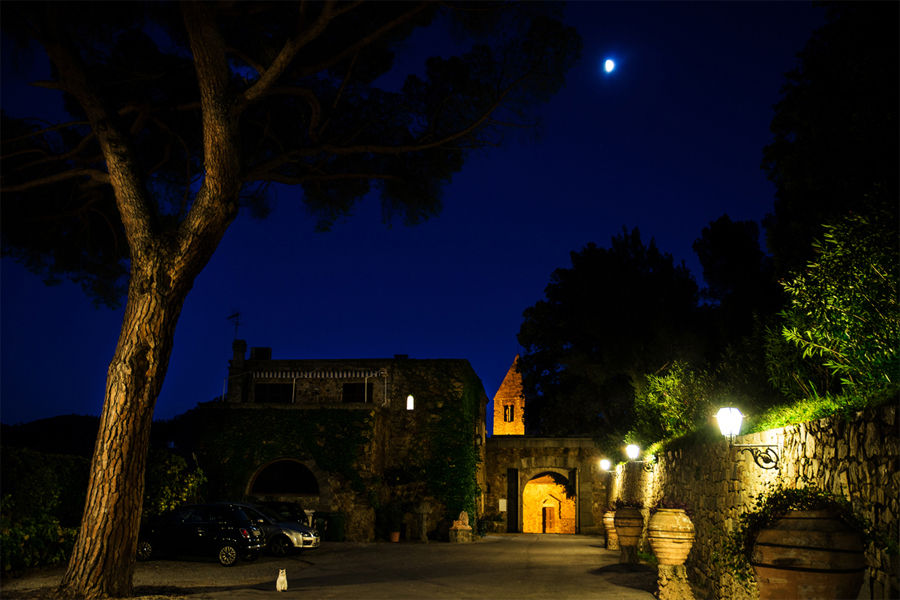