This romantic wedding photo shoot was filmed in Sanremo, the city of beautiful flowers, famous for the Italian Music Festival, a very popular song contest held in the city since 1951; and for its Casino, on the Costa Azzurra, in western Liguria, between impressive mountains and lovely rolling hills covered with olive groves, colored by the green Mediterranean turf and overlooking the Ligurian Sea, endless blue sea...

Once the Roman settlement of Matutia or Villa Matutiana, Sanremo expanded in the Early Middle Ages when the population moved to the high grounds. The nobility built a castle and the walled village of La Pigna to protect the town from Saracen raids. From the middle of the 18th century the town grew rapidly, in part due to the development of tourism, which saw the first grand hotels built and the town extended along the coast. The Empress "Sissi" of Austria, Empress Maria Alexandrovna of Russia, Emperor Nicholas II of Russia vacationed in Sanremo, while Swedish chemist Alfred Nobel made it his permanent home.

We drove the newlyweds to the medieval village of Bussana Vecchia, which has preserved its pristine medieval appearance, it is located high in the mountains above the sea. We walked along the narrow medieval streets, where everything breathes old times, is breathtaking when you think how many centuries ago these buildings were laid out of a rough stone ...We took a leisurely walk, walking and exploring the town, because the tourists there are not much; on the town square we met the fat goose, who, apparently, considers himself a dog -  loudly giggling, asks the tourists for something to eat,  persistently chasing passers-by and staring people in the eye, bowing his head sideways :)) And even tries to climb into the bags, checking whether he was given everything was given to him, that there was an edible. Later, we met his owner, it turned out that she was holding him as a companion, as a dog. Awesome goose)) After a walk in the borgo of Bussana Vecchia we went down to Sanremo, walked around the casino and then along the waterfront, made a small photo session there, and at sunset finished our photo shooting on the beach, among a pile of rock fragments protecting the beach from the waves, in the light of the moon.

More photos from this wedding you can view in album 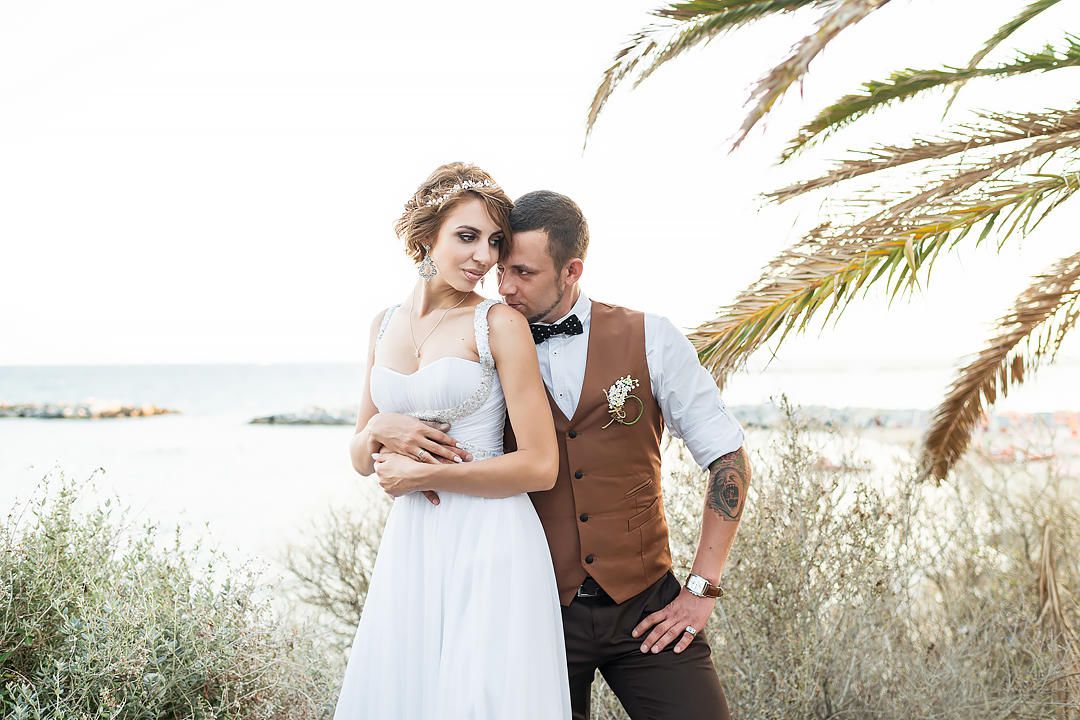